Wednesday Word of the Week 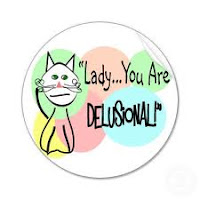 This weeks edition of the Word of the Week is......

-noun
1. an act or instance of deluding
2. the state of being deluded
3. a false belief or opinion : delusions of grandeur (this one is my favorites)
4. Psychiatry - a fixed false belief that is resistant to reason or confrontation with actual fact
5. a false belief strongly held in spite of invalidating evidence (another favorite of mine)

My belief that Spring will arrive - just as the Groundhog said makes me think I must be delusional.

My belief that someday a dandlylion will pop up on my lawn - pushing its way up through 3 feet of snow and ice that I believe will never leave - makes me think I am delusional.  Kim at My Field of Dreams has a dandylion and gosh-darn-it I WANT ONE TOO.   Spring in California......Whatever!  LOL

To the paper boy who this morning was too friggin lazy to extend his arm a few inches to get my newspaper within reaching distance of the front door - If you think you are getting a tip this week - YOU are delusional.

And to the local Moron who yesterday thought it was a good idea to rob one of our banks - Hahaha  Did you get delusions of grandeur while watching Oceans Eleven on TV last weekend?  IDIOT

And speaking of delusional...... 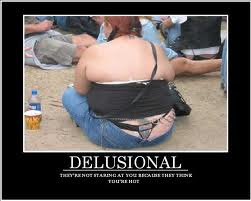 In case you can't read the caption, it says   "They're not staring at you because they think you're hot"

Labels: foolishness, Word of the week