You would think since it is almost July, I should be whining about how hot it is. Instead I'm whining about how I wish I was whining about it being too hot.  It's downright chilly.  There have only been a few days it was warm enough for shorts.  Seems pointless to shave your legs regularly if they're covered in pants.  Lol
Speaking of pants, today I was feeling a little wild.....check out my new leggings. 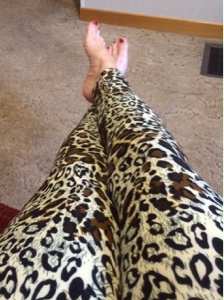 Calm down, these are just for around the house - not out in public.  Well, except for Friday night.  I put them on after work to mow the lawn but then I got that invite for a barbecue. I assumed my friend was home alone so I didn't bother to change.  Nope, the whole damn family was there.   Oooooops!
More domesticity today.  Since it was cool and more rain was forecast, I made a big batch of chili in the slow cooker and then in a random impulse I decided to make a pie FROM SCRATCH!  I made a coconut cream pie (no cheater packs of pudding mix either) completely from scratch.  It's chilling in the fridge but there was some left after I filled the crust.  Tea and pudding for dessert 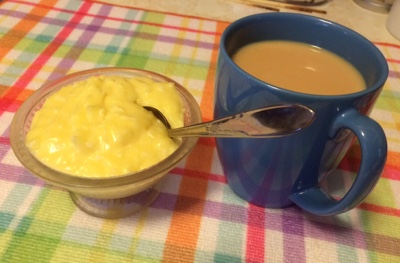 Now for the bad blogger part of my day.  I found this great old wooden dresser a few weeks ago at the second-hand store.  I am planning on re-doing it for a new TV stand.  It's in the garage.  Today I thought I could get the first coat of paint on it before the rain came.  I'm using a Paris Grey chalk paint. I was going to take a before pic and then progress shots.  Well, after the first coat of paint was on, I realized I took NO pictures before.  Arrrghhhhhhhh, dumb.
Sorry folks.  I guess you'll just see the after pics when it's finished.  I have a few days off this week so maybe I will make some more progress.
Posted by Kim at 8:39 PM