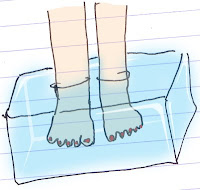 I don't normally get excited for Mondays, but I'm glad the weekend is over. Friday we had a snowstorm. While most businesses in town closed up by 1pm, we kept our offices open until 2:30pm. Snow plows were just starting to head out so roads, streets and our parking lot were not in the best shape. I managed to get home OK but I saw a few of our guys push some co-workers out of the parking lot.
It was kind of nice to get home early and cuddle up on the sofa for a snowday, and I fell asleep. Now I almost never am able to take a midday nap, so it was a pleasant surprise. Auntie woke me up in time for supper and I was exhausted. Like a soggy noodle. (Most people feel refreshed after a nap, or so I hear) And this seems to be the trigger for the downward spiral........
I couldn't stay awake after that. Almost felt like I had been drugged or something. I woke up Saturday feeling terrible with a nasty persistent cough. (Yes, for those of you keeping track, this is the THIRD time I have been sick this winter) And AGAIN, could not stay awake, and slept on the sofa for most of the day. Reports indicate there was even some snoring!!
Sunday morning.........woke up feeling alert......WOW this is a good sign. Jumped out of bed and was stunned by a feeling of waking in the frozen tundra. Ran downstairs to turn up the furnace and NOTHING.............CRAP its minus 18 degrees and the furnace is broken. Hmmm repair guys charge double on Sunday. Double CRAP!
Called the company and luckily the repair guy arrived in 15 minutes! What a sweetheart. Apparently it was just a fuse, but you couldn't tell without checking them all because it didn't blow out and turn black. (Because I DID check the fuse box before I called)
Still not quite feeling up to par but at least I can stay awake for longer than a hour at a time. Corinne has dyed some sample wool for my next rug, so hopefully will get a look at it later and start the new project in a day or so. Still contemplating the butterfly finishing technique.
Posted by Kim at 1:09 PM