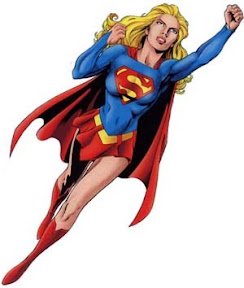 It's always interesting to compare perception to reality. This morning as I went through my morning routine it seemed a little chilly. I turned up the thermostat and continued to read the paper. After a while I noticed I didn't hear the furnace running (or feel any heat). Crap! Just what you need on a Monday morning, a busted furnace. Oh, and it was about minus 15 outside.

For some reason I can't explain, I decided I could fix this myself. Apparently i was having a Supergirl delusion. I grabbed my flashlight and headed down to the basement. (AKA where the spiders live). I checked the fuses, then the furnace and hit the reset button. It started to purr.

So I was feeling pretty cocky. I was Supergirl - nothing could hold me down. I went to work feeling like I had saved the day. By the time the Golden Girls got up the house would be toasty warm and all would be good.

Then about a half hour later reality kicked in. Auntie called me at work, she was freezing and crabby. Apparently the furnace stopped purring the second I raced out the door. We had to call the repair man and the good news is it was fixed by 10:30am. So that's 2 (if you believe in the law of 3's). Last week the water heater and now the furnace. What's next?? And I hope it's cheap.

Monday morning lived up to the perception of being crappy. That's the reality!


- Posted using BlogPress from my iPad