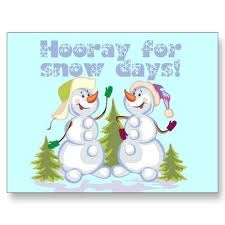 It's rare to get a snow day once you become an adult.  I remember snow days as a kid.  If you heard it was supposed to snow the next day, you went to bed and prayed for school to be cancelled.

Unlike today, back in those days school was rarely cancelled unless it was a major blizzard.  Nowadays 4 flakes fall from the sky and school is cancelled.  Sheesh

But work is almost never cancelled - Except for today at noon.  I would say that if I had waited another hour or so, it might have been difficult to get in the driveway without getting stuck.  A free weekday afternoon with no chores.  It was heaven.

I hooked away on my new rug for most of the afternoon.  Well, except for a few times that a jealous little dog required some attention.  It's hard to hook when something is staring at you and head butting your arm.  But I would be lost without her :)

The snow stopped around supper time and I shovelled for about an hour.  It wasn't that bad actually.  It was still the light and fluffy kind so I didn't mind it as much as usual.  I can't believe I just said that, but it was kind of refreshing out there tonight.

I added a pretty new teal strip to this rug project.  Not a great picture but once the rug is finished I will post a proper picture. 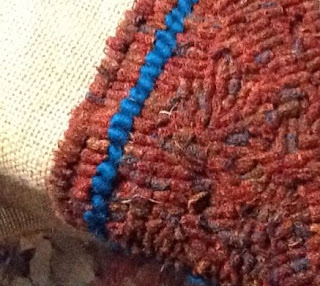 February is off to a roaring start.  I wonder what the Groundhog will have to say?