I've got snow for sale. Any offers? I'll negotiate and give it away for free......No takers? Well, Crap.
I wish I could say this was my last post about weather whining but you know that's not gonna happen! We got lots of snow and wind but we survived. We've had much worse, but I think you're more of a worry-wart when someone is sick in the house.
I worried about keeping the yard and entrances clear, you know, just in case we needed to get out.
I started shoveling this morning early. Here's the back entrance. Note the compost bin (still buried) 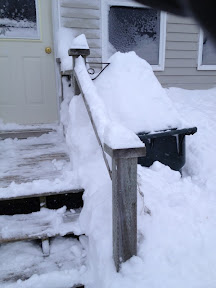 I dug out both cars. The front of my car was almost clear but the back end was completely covered. Stupid drifts. The front walkway was waist high. Yes, really! 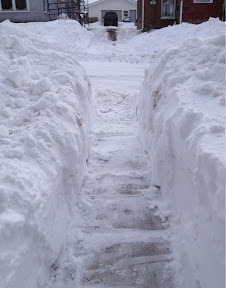 I only did a very narrow path, but it still took awhile. Made even worse because my boots filled with snow while I scaled the bank. Ahh, winter fun.

I'm watching a little Grammy Red Carpet before Downton and finishing knitting the pink scarf. I'm trying not to dread Monday morning because this is a short work week for me.

- Posted using BlogPress from my iPad