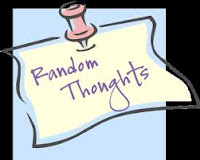 There has been so much going on lately.  Both at work and at home. Unfortunately none of it is blog-able.    Sometime when I win the lottery and retire to a private tropical island, I'm going to write a book.  Sure thing bestseller!

So instead you get my random thoughts today.  I tried to post last night but the second I opened up blogger, my mind went blank.

Today was my Friday.  I have 4 days off in a row!  And as a bonus, the weather forecast is looking fabulous.  I think a little roadtrip might be in order tomorrow.

Today Auntie went out to lunch downtown with a friend.  When she got home she was laughing and told me the Cafe was packed.  She asked the waitress what was going on and she replied "Oh, they're all Hookers".   Now a few years ago, before I took up this craft, my dear prudish Auntie would have recoiled in horror.  But now that she is used to having "hookers" around, she just laughed and said "Oh Deanne must be having a class"

I'm reading Fifty Shades of Gray.  I'm blushing.  It is scandalous.  The critics said it was fairly explicit.  THAT was the understatement of the year.  (Still blushing)

For the next week or two, I will be trying to avoid going out after dark.  The June Bugs are insane this year.  Tuesday night poor Millie and I were under serious attack by those creepy hard shelled demons.  I have this fear of them getting stuck in my hair.  Millie is not a fan either.  She did not waste a minute doing her business.  It was in and out in record time.

Well, I feel that mind-blank thing happening again.  That's all for now.
Posted by Kim at 7:09 PM