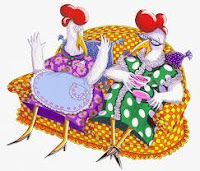 Tonight, as every Thursday night, is Hen Night here.  A friend of Mom's - a retired hair dresser - comes to the house to do her hair and several other "old dolls" come over as well.

So the old gals get to have a visit and they are all clucking and gossiping and of course - expecting tea and a lunch.  My head is usually spinning by the time they all leave later tonight!  Lol   Normally I don't mind but with all the "balderdash" at work this week I don't have the same level of patience tonight.

Its been quite a crazy hectic week so I haven't had much quiet time - or hooking time.  Maybe later tonight I will get to pull a few loops - to wind down.

Now I have to tell you about the old fella.  You know I have mentioned this before, that I have a thing for old guys.  Not in the Anna Nicole Smith kind of way (haha) but I just think they are so adorable, funny and charming.  Those old grandpa's have the greatest stories and sense of humor.

Yesterday the little church in my neighborhood was having a chowder luncheon.  They do this every few months and it is so good.  They only charge $8 and you get a large bowl of fish chowder, all the buscuits and rolls you want and a piece of dessert.  These desserts are all homemade by the church ladies and the serving size is huge - actually could be cut in two and still be a decent size serving.

Anyway, this old couple sat across from me.  I learned later they were brother and sister who had both lost their spouses.  The old fella had me in stitches the entire time.  You could tell all the church people knew him and that he was well liked.  When it was time for dessert he winked and said he was getting more than one.   There are usually 8 or 10 different choices - pie, pistachio squares, chocolate cake, sex-in-a-pan, blueberry cheesecake etc.     We each took a selection and after he was finished they came by with another tray.  He asked me what looked good so I picked for him and he slid half on my plate.  Then a third time - chocolate cake chunks in whipped cream and choc drizzle - he took it and gave me half again!

When I went back to work I was stuffed and half sick!  But don't ya just love those sweet old fellas?
Posted by Kim at 7:57 PM