The Bodyguard and the Hitman 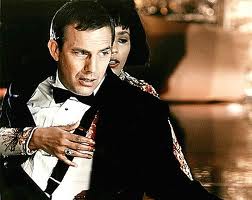 Remember this movie? However the rest of this post is not fiction.
Several years ago I went on a business trip to the Philippines.  It was part of a International Development Program we were involved in and I was lucky enough to spend 3 1/2 weeks there.   While it is an absolutely beautiful country with wonderful people, there is an element of danger.  There are parts of the country that have alot of rebel activity etc.

As part of the agreement, we were provided with 24/7 bodyguards in the form of Philippine National Police Officers.  Myself and another co-worker were provided with 3 (heavily armed) guards and they stuck to us like glue.  Perhaps I was a bit naive, but I believed it when they told me that this was just a formality and wasn't really necessary.  It wasn't until well into the trip that I began to suspect that these guys were probably a major blessing.

One morning I woke up early and discovered an old mattress outside my door.  Apparently they slept outside our doors each night and removed the "evidence" before I got up.  I asked about it later that day and they didn't want me to know because I might worry.  (Duh!)  They were very handy in the form of pest control however.  Me, being a girly girl, was fairly traumatized by the lizards.  These were not the cute little geckos we are familiar with - there were some big-ass lizards around.

My primary guard was Johnny and he was so sweet and good to me.  To the point of checking the public bathroom stalls for lizards.  (Yes - this was often necessary)    One particularly funny incident happened one evening as he walked me to my hotel room.  I closed the door, put down my purse, looked up and there it was ........ a giant lizard on the wall just inches away from my head.  (OK maybe not exactly giant - but still a lizard!)  Without thinking I let out a huge scream.   The next thing I know, my door is swinging open and Johnny is flying in with his hand on his gun!!!!   All I can do is tremble and point to the wall..... Here he thinks I am being murdered and all he sees is a lizard - which is as common to him as house flies to us.  He did kill it and then he mocked me mercilessly.  And of course the story spread to the other bodyguards.

While the country and people were generally wonderful, it is still a much different society and system than we are accustomed to.  Corruption and violence are sadly a common occurrence.  Today we received a news report from one of our contacts that on Sunday Johnny was the target of a Rebel Army hitman.  While attending an outdoor event he was shot and killed.

It is one thing to read or watch news reports of this type of thing, but it is quite disturbing to actually know someone that is involved.   While we often complain about our governments and policies, we truly do not know how lucky we are to live where we do.
Posted by Kim at 10:32 PM