Sometimes a refund is a bad thing 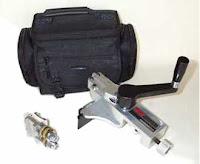 Several months ago I broke down and bought a Townsend Cutter and 2 cutter heads. As this was a major investment, my plan was to add new size heads once or twice a year as the budget permitted.

Some plans were not meant to be...... I'm sure all you rug hookers know by now that Townsend is closing their business in a few weeks. As soon as I read the sad news on another blog last weekend, I went directly to Ault's website and ordered 2 additional cutter heads. Woo Hoo ---or so I thought! Two days later I checked Ault's blog and read that they had received more orders than they had stock, so it was a waiting game to see if I would be one of the lucky ones.

Sigh.......last night I received an email from Larry Ault and they could not fill my order and were refunding my Paypal account! Bummer............ I have been franctically searching the web, and even put my name on a waiting list at Searsport Rug Hooking, but its not looking promising.
This is one time that getting money back SUCKS! I still have my Fraser cutter to fall back on for different size cuts but its just not the same.
Posted by Kim at 9:31 PM