It's the result that counts

Well, it appears I am not the only funny knitter.  After reading the comments I have quite a few new members for my O.K.A. group.

The "thigh" method is no stranger than the "armpit" method some of you referenced in your comments.   And Pat knits the most beautiful things and she's a thigh knitter too.

And its not how you do it that matters - its the end result that counts.  Maybe someday I will learn to hold the needles differently and be able to knit something fun with those crazy circular needles.

But for now I will carry on with my (apparently not so rare) technique.  This is the chemo cap I finished knitting today for a family friend. 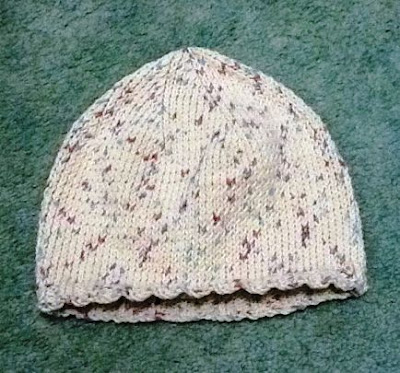 I'm getting closer to narrowing down a new rug design, so I will probably be putting the knitting needles away for awhile.  I can't stand not having a project, so when I get stuck I dig out the needles and yarn until I figure something out. ﻿

I'm a little behind on commenting and responding to emails.  I will get caught up eventually.  I think my brain is still on lazy vacation mode.
Posted by Kim at 8:14 PM